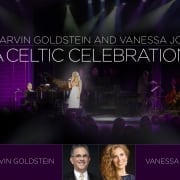 “I’d tell the people of Southeast Idaho to drop everything they are doing and stop by for an amazing musical experience,” said Goldstein, who has recorded nearly 50 albums. “We are really excited about performing with local musicians and the Celtic players coming up from Salt Lake.”

Besides playing the piano, Goldstein will play the French horn and accordion, and Joy will play violin in addition to singing.

He said the classical and popular music concert – featuring audience favorites such as “Amazing Grace,” Oh Danny Boy,”  “Shenandoah” and other recognizable tunes  – will be informal in nature with plenty of variety. It is music geared toward the whole family.

“I hope people will come hear how some of these songs are arranged and they’ll be different from what they’ve heard before,” Goldstein said. “The performance is very suitable for young children. Basically, anyone over age 6 will really enjoy this.”

Though most noted for playing the piano and his composing, Joy said Goldstein’s other musical talents shouldn’t be underestimated.

“People are going to hear Marvin play the accordion as well as French horn,” Joy said. “A lot of people don’t realize  he plays those instruments as well as the  piano.”

Goldstein said he’s been performing for more than 50 years, but the highlight of his career has been spending the last 10 years performing with Joy.

Audience members from southeast Idaho familiar with the quality of the Stephens Center understand what a compliment that is.