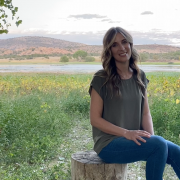 Click here to watch “Abide With Me” music video. This Christian hymn is most often sung to the tune “Eventide”. It was written by Henry Francis Lyte. It is believed that this hymn was started by Lyte while he was visiting an old friend who was dying. His friend William, kept repeating the phrase, “abide with me” as he stayed by his side.

This beautiful phrase stayed with Lyte for many years. As he approached his own death he reflected on the words his friend William had stated so many years prior. Lyte pondered the Bible verse in Luke 24:29 as well.

Lyte was weak and developed tuberculosis, but still insisted on preaching a sermon. On that same day, he gave a close relative the sweet hymn he had written, “Abide With Me”. Just a few short weeks later he died in 1847.

I hope this hymn brings you comfort and peace as it does me. You can find the link to listen to it free on my website as well.

Much love to you,

“My Daily Journal”
Scroll to top