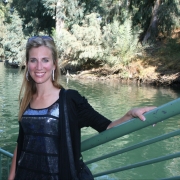 A celebrity. A General. A gentile with leprosy came to this river.

He was someone who was an idol worshipper, who did not know God. He was made clean by washing 7 times, in a dirty river. He purified himself after refusing to go but was finally convinced to try it. It changed his life forever. He became clean. More importantly He became a believer. He was a mighty hero. He was told to go to a prophet to help him. That prophet told him to immerse himself in the Jordan.

And his Leprosy was gone.

You will know that God is the God of Israel by reading the word of God. The word is all about HIM. God is a unifier. He is a God of miracles.

Come join me on the next tour to Israel. Reply to this email, or check out the website for the tour in April 2023.

Hope this encourages you!