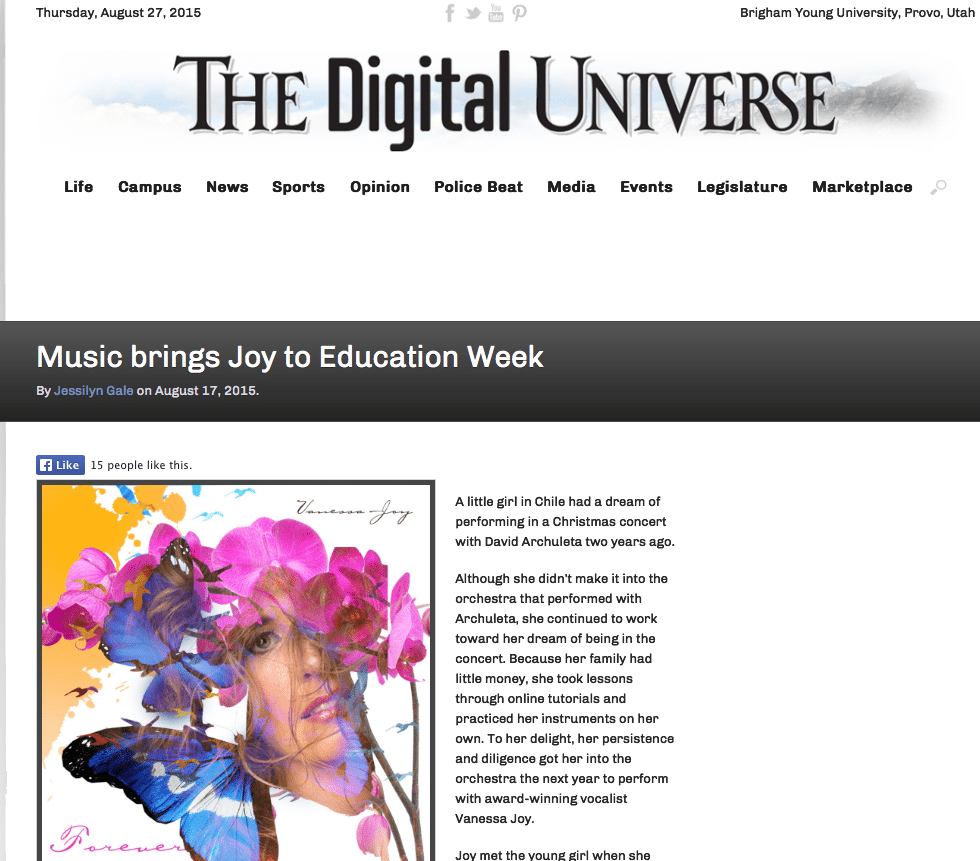 I was in the Digital Universe Newspaper at BYU. Here is the link to the article.

A little girl in Chile had a dream of performing in a Christmas concert with David Archuleta two years ago.

Although she didn’t make it into the orchestra that performed with Archuleta, she continued to work toward her dream of being in the concert. Because her family had little money, she took lessons through online tutorials and practiced her instruments on her own. To her delight, her persistence and diligence got her into the orchestra the next year to perform with award-winning vocalist Vanessa Joy.

Joy met the young girl when she performed in Chile after learning about her from the concert director.

“The story about her gives me so much joy,” Joy said. “I just love that girl. She’s an inspiration to never give up on your dreams and believe in yourself.”

The girl’s story served as a reminder to Joy about the power of music, a passion that both musicians share.

“The powerful thing about music is that it is a communication all on its own,” Joy said. “It can reach people deeper than what words alone can ever do.”

Music can break through language barriers and speak to all people, said Joy, who has performed in countries around the world. “Even though I don’t speak [their language], they were still able to hear and feel my heart,” she said.

Joy is teaching a music series at Education Week next to acclaimed pianist Marvin Goldstein and renowned religious singer and songwriter Janice Kapp Perry. All three artists are members of the Church of Jesus Christ of Latter-day Saints. Goldstein has presented at Education Week for 24 years and was also part of the Christmas concert in Chile with Joy.

“Vanessa is an amazingly sensitive and talented performer, able to interpret the spirit as she sings,” said Goldstein, who has worked with Joy for about five years. “It’s really an amazing talent to be that in tune. It’s not something memorized.”

This year, their Education Week course will be focused on the positive effects that music can bring into life, according to Joy.

Goldstein said he also believes in the power of music, and believes that people should use their talents more. “From a primary child to a 95-year-old person … many of them have been given distinct gifts of music, of art, of voice, of rhythm,” he said.

Both Goldstein and Joy said they feel sharing music can benefit missionary work and attract people to the gospel.

“Music opens doors,” Joy said. “It’s a way of communication we don’t utilize enough. It’s a gift from God and we need to use it.”

Joy’s new album “Forever” will be released during Education Week. The album will have a new age kind of sound, something different than anything she has done in the past.

“I use my voice and I’m still the vocalist, but there are no words,” Joy said. “The cool thing about it is it still tells a story.”

Joy said she hopes to continue to teach people about the power of music, both through her classes and through the example she sets as a performer. Goldstein is a witness of Vanessa’s ability to influence people through her performing.

“Vanessa is extremely sensitive and could teach thousands of people by example, through performance,” he said.

Joy said she wants to encourage others to use their many talents to benefit those around them. “All of us have gifts,” she said. “They’re to give away and share. It’s not something we keep to ourselves. It’s something [people] can learn about at Education Week.”