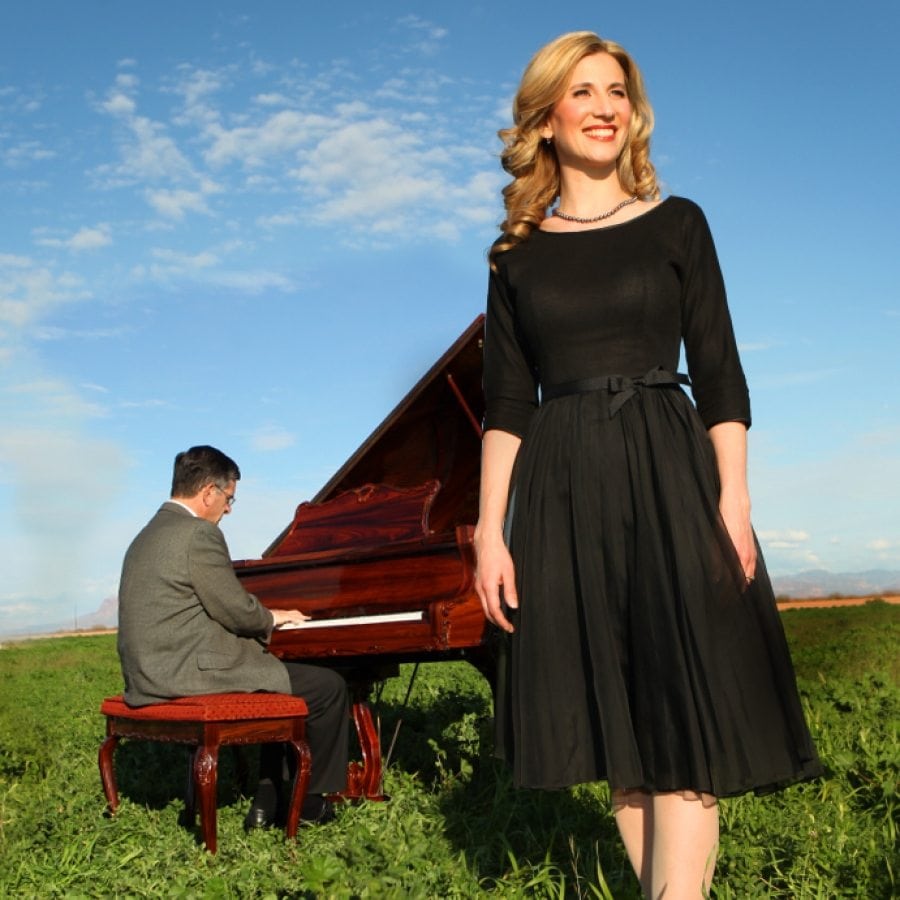 Check out the article written about “Goldnjoy” and our upcoming concert in Burley, ID.

BURLEY – A world renowned pianist and singer will entertain at the King Fine Arts Center while also raising money for the National Pioneer Hall of Fame.

Marvin Goldstein and Vanessa Joy will perform at 7 p.m., Saturday, June 18, at the King Fine Arts Center. Reserve tickets are $10 while general admission tickets are $8. Proceeds from the event will go toward funding the pioneer organization and its various youth programs.

“She’s a vocalist, and he’s a piano player and entertainer. He’ll be playing while she sings,” said Dale Whipple whose Burley Book Plaza is helping to sponsor the event.

The Pioneer Choir will open for Goldstein and Joy.

“They come from Minidoka, Cassia, Twin Falls and Jerome and are under the direction of Carolee Remington,” Whipple said.

Goldstein and Joy will put on a show called “Gold ‘n Joy.” They will perform everything from contemporary to religious songs.

Goldstein began studying music when he was nine years old, and, following high school, he received a music scholarship to Tel Aviv University School of Music.  He followed that up with studying at the Mozarteum in Salzburg, Austria. He later earned  bachelor and master of music degrees at Florida State University in Tallahassee.

Goldstein has recorded more than 40 CDs and recently teamed up with Joy to make a CD.

“Finding the great talents of Vanessa Joy caused the project to come to pass. The project of coupling art and music bubbled for 20 years then finding its life because of the great talents of Vanessa Joy. The DVD has captured the essence of the Spirit of The Lord through the most powerful language ever known: music, art and song. Thank you, Vanessa, for bringing this project to life,” he said.

The pair met during a singer/song writer workshop in Phoenix, where Joy is from. Goldstein invited Joy to help with the project, and the two have presented concerts all over the world. They recently performed during the Peace Concerts in Israel and Egypt.

Joy started playing the violin at the age of four. She later switched to singing and performed in musical theatre. She graduated with a degree in music from Brigham Young University. She is the married mother of two daughters who often travel with her.

This is the third time that Whipple has invited Goldstein to perform.

“I’ve known him for years and years. He’s a personal friend,” Whipple said.

Whipple says that Goldstein is a master showman.

“I like that he’s an entertainer as well as a musician. He talks to the audience, and they ask him questions. They give him songs to play, and he plays them impromptu. We’ve had him for small events and big events. He does a lot of charity work,” Whipple said.

Whipple said that the money will help with continued funding of the Pioneer Hall of Fame.

“We have an education program and an entertainment program. The purpose of the hall of fame is to preserve pioneer things like wagons, stagecoaches and handcarts and to preserve our pioneer heritage,” he said.

Whipple says that the event is not to be missed.

“It’s going to be a lot of fun. People are really going to enjoy it,” he said.