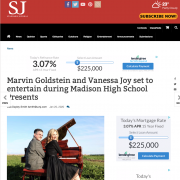 The two will entertain during the annual Madison High School Presents scheduled at 7 p.m., Wednesday in the high school’s auditorium. Funds generated from the concert will be earmarked for the school’s various music programs.

“They have a huge music program at the school,” said Joy.

“It will be quite powerful with all that many voices,” she said.

Joy has Irish roots and says that the concert makes her feel closer to her Irish ancestors.

“The Celtic songs pull at my heartstrings. I hope it does other people. It’s a special connection, definitely. Celtic music is definitely deep in my roots, and something I’ve always been drawn to,” she said.

Joy and Goldstein learned about the annual Madison High School Presents thanks to their friendship with high school music director Doug Hansen. They met Hansen following concerts they put on at Brigham Young University-Idaho during Education Week last year.

“We spoke to Doug about the possibility of doing our show with their group, and now it’s finally come to pass. It’s actually going to happen. It’s pretty fun to make that friendship,” Joy said.

Goldstein said he was thrilled to learn that Madison High School has such a strong music program.

“It’s just fascinating that the high school is so involved with the arts. We asked Doug if our program could fit in with what they’re doing. He invited us some months ago to be a part of it,” he said.

Goldstein will play both the piano and the accordion during the event. He started playing the accordion as a child, and in 1959, he earned $10 for having done so — the first time he’d been paid to entertain. Goldstein has been playing the piano since he was 16 years old. Joy has also studied violin and voice since she was a child.

During the concert, Goldstein and Joy plan a skit featuring the accordion and the violin.

Goldstein says that the upcoming high school show will concentrate on vocals with a couple of piano pieces presented during the event.

“The songs are all specially written arrangements for a full orchestra. They’re not copied from anything else. They’re an original arrangement,” he said.

Goldstein said the Celtic arrangements prove to be a good fit for the entertainers.

“It’s a fusion of pop music with a Celtic twist,” he said.

Goldstein and Joy also plan to present some popular tunes that will make it a really fun concert, Goldstein said.

“It’s a good energy show. It’s music that is well known by audiences and is well received,” he said.

The young and the young at heart will appreciate the music, Goldstein said.

Goldstein and Joy have been performing together for about 10 years and have toured all over the world. They met when Goldstein gave a workshop on the music business, and the two subsequently opted to entertain together. They plan 20 concerts this year with one scheduled in Israel later this year.

As for the upcoming concert, Goldstein said that he and Joy have never performed with so many other musicians and backup singers like they will on Wednesday.

“It’s the largest number of people we’ll have ever played with on a stage,” he said and joked. “I’m not sure if they’ll be hanging from the rafters or be coming in from zip lines from the side. It’s going to be a wild night.”

Tickets may be purchased at https://mhschoirs.ludus.com/index.php?step=seats. For more information on Wednesday’s concert call the high school at 208-359-3305.

The Lord Is My Light
Scroll to top