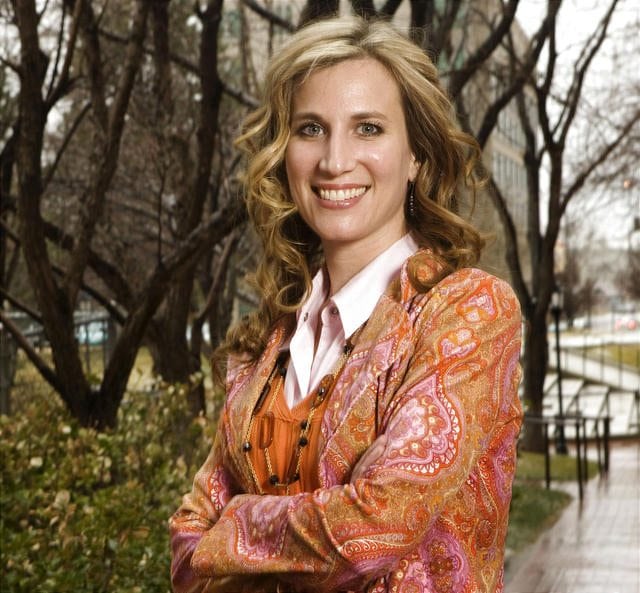 Vanessa Joy has always believed in the power of music to move and uplift.

“It has always been an important part of my life,” she says. “It inspires in ways that speaking can’t.”

So when Joy decided to go to a singer/songwriter workshop being held in her hometown of Phoenix, she knew she would find ways to make music more meaningful in her life. She didn’t know that she would be swept into a course of life-changing events that would take her all over the country — and the world.

One of the instructors at the seminar was Marvin Goldstein, a Florida-based musician who has been active on the LDS music scene for the past 50 years.

“He asked me if I’d like to do a project together,” Joy said on a recent visit to Salt Lake City, where she and Goldstein were doing LDS firesides and other programs.

“We began looking for music,” she said. “I wanted to start with inspirational music, so our focus was on some of the old traditional hymns that have such timeless, beautiful messages. Many of them were new to me, but I had such an exciting time learning them.”

The result has been a CD, “Sweet By and By,” as well as a DVD, titled “Expressions of Christ,” where Joy’s singing has been paired with Greg Olsen paintings of the Savior. They feature such songs as “Softly ad Tenderly,” “Blessed Assurance,” “Be Thou My Vision,” “In the Garden” and “Just As I Am.”

Arrangements and piano accompaniment are done by Goldstein.

They have hit not only the LDS market but also the Christian market “in a big way,” says Goldstein. They were invited to perform in an Evangelical Baptist Church in Cocoa, Fla., for one thing; even more exciting was an invitation to perform at Peace Concerts in Egypt and Israel.

The concert in Egypt was sponsored by the deputy ambassador there, before the recent troubles broke out, and took place in the Coptic area. In Israel, they performed at the Sea of Galilee and in Tiberius. In both places, they performed with local orchestras, comprised of Arabs, Christians and Muslims. Bringing them all together for the concert was an amazing experience, said Goldstein. “It was music, not politics. It was religion on a different level.”

Goldstein has been doing such Peace Concerts for a number of years, but it was a new experience for Joy. It has all been very exciting, she said, and she loves the universal appeal of the music. “These are songs that appeal to a lot of denominations, to any people that believe in Christ.”

There have also been performances in places such as San Antonio, Las Vegas, Idaho, as well as many in Utah.

You never know where music will take you, Joy said, but you know it will be a good place.

She started playing the violin at age 4, but “I enjoyed being able to communicate with words, so I switched to singing. I got into musical theater and really enjoyed that.” Joy was born in Minnesota, went to school in Idaho at then-Ricks College, and graduated in music from BYU. She moved to Arizona about a year-and-a-half ago, when her husband got a job there. They have two daughters, who sometimes get to travel with their mom. “It’s been fun for them. They don’t quite understand it, but they know their mom does something.”

Goldstein has been excited to team up with Joy. “She has a talent that was ready for the next step,” he said. “Her voice is suited for all kinds of music. In fact, she’ll be doing some classes on Broadway music for BYU Education Week. So she’s on the map for education as well as performing.”

After 50 years of performing, Goldstein jokes, “I was thinking of slowing down. Then she showed up. At first, I was invited to places, and I’d take her along. Now she gets the invitations, and drags me there. She might wear me out.”

Joy has no worries about that. “We are working hard,” she admitted, “but I have this wonderful mentor to look up to. I can’t tell you how much I love performing with him. I’ve always had goals and ideals I was working toward, but I was really blessed to be in the right place at the right time.”

They are starting to work on a second album of inspirational music that may also include some love songs. Her greatest hope is that her music will touch others in ways it has touched her. “If it can help someone change for the better, if it can move and uplift them, that’s all I want.”